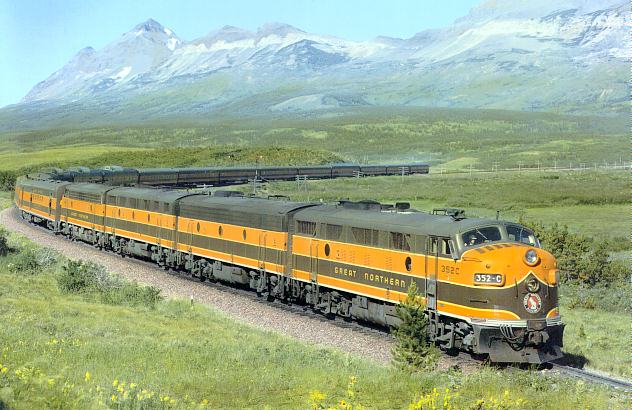 Inaugerated in 1929 the Empire Builder was Great Northern's premier Chicago to Seattle/Portland train. It was named after James J. Hill, the 'Empire Builder'.

The train took advantage of significant route improvements in the Cascade Mountains. These included the new 7.8 mile long Cascade Tunnel and the Chumstick Valley line change.

Motive power was either a P2 class 4-8-2 or S2 class 4-8-4 steam locomotive. Between Skykomish and Wenatchee, electrics handled the consist. These trains were the last word in comfort, amenities and speed for their day. Punctuating the train was the last car, an 89' buffet-lounge-solarium-observation with a sun room replacing the traditional open platform.

The Empire Builder ran between the Pacific Northwest and St. Paul on the Great Northern and on the Burlington Route between St. Paul and Chicago.

Then, as now, the train split at Spokane with one section going to Seattle and one to Portland.

See our Reference Sheet #178 for a more detailed look at this version of the Empire Builder.

With the advent of the depression, the Empire Builder was rerouted and given a slightly faster running time of 58 hours 45 minutes westbound and 56 hours, 25 minutes eastbound. Its companion train, the OrientalLimited was discontinued on March 29.

Air Conditioning was introduced on the Empire Builder.

58 seat, semi-streamlined luxury coaches are added to the train.

With the United States' entry into World War II, the Empire Builder began running in sections to handle the increased passenger traffic.

First #1 and First #2 were the sleepers.

Second #1 and Second #2 were the coaches.

Any additional sections were generally troop trains or "Mains".

Glacier Park closed for the duration of the war.

Between April and June, pairs of E7A diesel passenger locomotives arrive from EMD. These would be initial power for the postwar Empire Builder.

February 23 saw the inauguration of the postwar edition of the Empire Builder. These five consists of 12 streamlined cars each were built by Pullman. The trains were given a 45 hour schedule between Chicago and Seattle.

These trains were decked out from E unit to River series observation car in an eye-popping Omaha Orange, Pullman Green and gold stripe paint scheme. What came to be known as the "Empire Builder scheme" became the standard for GN passenger trains for the next 20 years.

See our Reference Sheet #190 for a more detailed look at this version of the Empire Builder.

E7 diesel passenger locomotives experience overheating problemsin the mountains. They are replaced by an A-B-A set of EMD F units (F3's and F7's). Great Northern modified these units into "Passenger F's" with higher gearing for greater speed and boilers for steam heat.

Great Northern stuns the railroad industry and completely re-equips the Empire Builder. In a joint order with Pullman and American Car & Foundry, GN inaugurates 6 all new 15 car consists. These became known as the "Mid-Century Empire Builder".

This edition of the Builder introduces the tall-windowed Mountain Series observation cars and famous "Ranch Cars", a western-themed lounge car featuring the G Bar N brand as its trademark. Meant to emulate a western chuck wagon (complete with pinto leather seats and huge coffee pot), these quickly become the most popular car on the train.

On June 3, the "Oriental Limited" name is retired and replaced with the name "Western Star". This train uses the equipment from the original 1947 postwar Empire Builder. The Western Star makes all the summer season stops in Glacier Park that the Empire Builder skips.

See our Reference Sheet #209 for a more detailed look at this version of the Empire Builder.

May 29 sees the introduction of Budd-built "short" domes, 3 to a train consist. Also from Budd comes full-length dome lounges for first-class passengers which arrive in October. All called "Great Domes" by the Great Northern, the 3 shorts and 1 full dome per train provided a whopping 150 dome seats for Builder passengers.

The 1955 edition of the Empire Builder represents the zenith of the the train's evolution on the GN. To pull the heavier consist, GN now assigns 4 EMD F units (Passenger F's) arranged in A-B-B-A fashion.

See our Reference Sheet #227 for a more detailed look at this version of the Empire Builder.

July 31 sees the end of the Cascade electrification and for the first time, the Empire Builder operates Chicago to Seattle straight through under diesel power.

In February, the Coulee Series observations are removed during the winter season.

See our Reference Sheet #244 for a more detailed look at this version of the Empire Builder.

The "simplified scheme" appears on the Empire Builder's Passenger Fs (as well as future orders for freight engines). Designed to save a day's time painting, it features orange on top, green on the bottom and no gold stripes. Passenger cars retain the traditional orange/green/gold stripe EB scheme.

May 11 is the beginning of the "Big Sky Blue" era. Passenger equipment begins to receive the blue, gray and white paint scheme replacing the traditional EB scheme.

Coulee Series observation cars are permanently removed from the Empire Builder (and are later rebuilt into coaches).

In the fall, all RPOs (Railway Post Office) cars are terminated by the Post Office. This is a tremendous loss of revenue for the Empire Builder.

The Empire Builder begins stopping at the summer season stops in Glacier Park (East Glacier and Belton). The Builder also assumes operation of the tourist sleeping cars to Glacier Park, that previously were handled by the Western Star.

Experimental Cascade Green paint schemes begin to appear on some GN passenger equipment (a harbinger of the upcoming BN merger).

May 1 is the start of Amtrak which begins to operate most U.S. passenger train service.

The lone Chicago-Seattle passenger train is the Empire Builder, but it is routed between Chicago and St. Paul via the Milwaukee Road. West of St. Paul, the pre-Amtrak route is used to Fargo and from Minot to Sandpoint.

Between Fargo and Minot, the train operates via Grand Forks instead of New Rockford. Between Sandpoint and Seattle, the former Northern Pacific line via Pasco and Yakima is used.

The Portland-Spokane section of the Builder is terminated.

The ex-GN portion is now the Twin Cities to Sandpoint, Idaho.

September: Because of a shortage of operable aging equipment, the frequency of the Empire Builder is reduced from daily to four days per week.

March 1: The Empire Builder begins serving the new "Midway" station in St. Paul, Minnesota, and all passenger service ends at the former Great Northern Station in Minneapolis, which had been used by the Empire Builder.

Along with three-day-per-week service from the North Coast Hiawatha (Amtrak service added starting on June 5, 1971) running on mostly a former NP routing (but on the pre-Amtrak Empire Builder route between Spokane and Seattle), this provides one daily Chicago to Seattle train across the Northern Plains.

The ex-GN portion of the route is now the Twin Cities to Sauk Rapids (St. Cloud) and Moorhead, MN (Fargo, ND) to Sandpoint, Idaho.

October 28: The Empire Builder becomes the first long-distance train to be given the new bi-level Superliner equipment. At this time, the Superliner lounge cars have yet to be placed into service and the train runs with as few as two coaches, a diner, and one sleeping car on a tri-weekly schedule; certainly, the lowest point of available passenger-carrying capacity.

Owing to a desire by Burlington Northern to downgrade the former NP main line between Pasco and Auburn in Washington State, the Empire Builder resumes its pre-Amtrak and ex-GN routing between Spokane and Seattle via Wenatchee, and for the first time as an Amtrak train, receives a Portland section from Spokane via Pasco and Wishram.

The faster routing on the former GN between Spokane and Seattle allows a major schedule change, that with the new Portland section, provides much improved connections to other Amtrak trains in Chicago and Portland.

The ex-GN portion of the Empire Builder route is now Twin Cities to Sauk Rapids, MN; Moorhead, MN to Sandpoint, ID, and Spokane to Seattle.

The Empire Builder (operating tri-weekly since 1979) begins a seasonal daily operation over the Christmas 1981 and New Year's 1982 holiday period, but in January 1982, Amtrak announces that the train will not revert to a tri-weekly operation and will remain daily.

Reasons for the upgrade in service were given as good patronage (helped by the new routing and Portland section implemented just a couple months before), and influence by Senator Mark Andrews of North Dakota, Chairman of the Senate Appropriations Committee.

Amtrak builds a new station in Grand Forks, North Dakota that eliminates the need for the Empire Builder to head into the station from a junction west of downtown and then back out before preceding. Actually, this backup move had been eliminated some months earlier with the train stopping in "West Grand Forks" (at the wye) and passengers bused to the ex-GN/Amtrak station downtown.

Citing a budget crunch, and in a move reminiscent of 1977, Amtrak reduces the frequency of the Empire Builder on February 1 from daily to four times per week west of St. Paul. Daily service continues to be provided between the endpoints of Chicago and Seattle.

On the days that the Empire Builder does not operate, the Pioneer (started by Amtrak in 1977) runs on its tri-weekly schedule via Omaha, Denver, Laramie, and Boise (more or less on the ex-UP City of Portland route).

Empire Builder Interpretive Guides program is started on the train sponsored by GNRHS through the 2000 season.

These guides ride the Builder from Edmonds to Shelby and inform passengers about the local history, flora, fauna, and geology of the regions they are passing through.

Citing a continued shortfall of operating funds and a need to cut back, Amtrak announces the discontinuance of tri-weekly Chicago to Seattle Pioneer as well as other trains.

With the equipment freed from these trains, Amtrak restores the Empire Builder to a daily operation over the entire route.

There is also an Empire Builder font available for download.