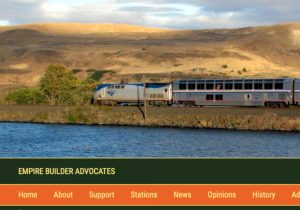 Historical information is an important consideration with the Empire Builder, named for James J. Hill, whose railroad helped settle the American Northwest and was the primary driver in the creation of Glacier National Park.

The website allows learning about the train, how to use the train, why the train is important, and how you can support the continued operation of the train. The Empire Builder operates daily between Chicago and Portland and Seattle across America’s Northern Tier via Minneapolis/St. Paul, Grand Forks, Glacier National Park, and Spokane, providing a valued service to online communities (many with few transportation options). Its continued operation is vital to these communities.