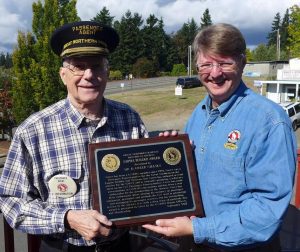 On Saturday, September 30, 2017, Dr. D. Greer Nielsen was presented with a GNRHS “Empire Builder” award by Board Members Scott Tanner and Lindsay Korst.   Greer was a Passenger Representative for the Great Northern Railway on the Empire Builder and Western Star.

Greer has authored several articles for the GOAT and is currently preparing a reference sheet on the GN Passenger Representative. Greer has made presentations at GNRHS conventions and has been a real ambassador for the membership in the Society.

Greer has been enthusiastic about sharing his memory on passenger equipment, personnel and methods the GN used in promoting and managing its passenger services. For his outstanding service to the Society, it is with a deep sense of gratitude this award is presented to Greer by the GNRHS Board, Officers and Membership. Directors Tanner and Korst stand with Greer as he accepts his award.